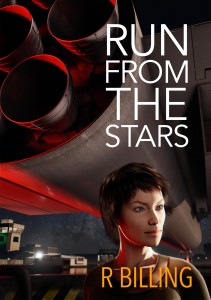 The nine-world Arcturian Confederation have imposed five centuries of peace across more than five hundred human colonies. If orthodynamics, the technology behind faster than light travel, fell into the wrong hands, this utopia could end in a catastrophic interstellar war.

The Arcturian Space Fleet grew old and inflexible waiting for the wars that never came. Now two unscrupulous adventurers believe it would be easy prey. They plan to take over a recently colonised planet, and they don’t care how many colonists they kill.

One small and seemingly fragile woman stands between them and success. A woman with a core of pure steel.

Space Fleet’s Jane Gould alone can save the colonists, but at what personal cost?

Duncan backed away from her. ‘I was going to say that I was flattered that the Arcturians have sent me such a charming spy, but look on this as a little test of your ingenuity. The key to your cuffs is there,’ he dropped the key over the side of the catwalk. Seconds later it rang on the shellcrete floor. ‘And you’re here.’ He turned to Peters. ‘Do you see it now, do you see your weapon?’

Kelso laughed. ‘That is delightful. You’re telling me that I’ve moved a planetbusting weapon across space, and not only have I completely hoodwinked the mighty Arcturian Space Fleet but you as well, who actually assembled it.’

‘Weapon, Mr. Keys? What weapon is that?’

‘Think about what I told you when we first met, that you’d take the planet back from the New Californians. Remember that I said I’d bring you the weapon to do it.’

‘Do you really not see it?’

Kelso was almost crying with laughter. ‘The reactor, man, the reactor itself is the weapon.’

‘How is that, Mr. Keys? Reactors are perfectly safe.’

‘You switch it into maintenance mode- Look, I’ll show you.’ Kelso moved to a control desk, a little way along the catwalk. There was a whine of big motors, and Jane watched the reactor slowly unfold itself. ‘You open it right up, as if you wanted to get at the primer and the containment magnets for an overhaul, and you leave it like that.’ The motors stopped. ‘Now what happens if I switch on the magnets and initiate the primer?’

‘I shouldn’t do that, Mr. Keys, the primer would not be contained, and there is no interlock.’

‘Exactly. Instead of priming a fusion reaction inside the reactor, it fires directly upwards, through the magnets, which focus it into a nicely parallel beam. The radiation will burn through the roof then prime a ten thousand foot column of air above the building. If the weather is humid, as it is tonight, it’ll trigger a thunderstorm. Now what happens if you do that with twenty reactors at once?’

‘It breaks the terraforming, that’s what happens. It’s weather control on the grand scale, man. The planet has a short ice age, two or three years. The Arcturians evacuate the population, or at least those they can find. But if you’ve done your job properly they don’t find our people.’

‘And when the ice melts, and Space Fleet comes back, they find us in control. We’ve done it, man, we’ve stolen a whole damned planet off the confederation.’

‘However, this little bitch has to turn up and try to spoil it.’ He leaned back slightly, and a shark-toothed grin spread over his face as he continued. ‘Unfortunately she broke in to the reactor hall as we were testing, and was killed by radiation from the primer. Examination of the body showed no marks of violence, except for two red lines around the wrists, which could well have been caused by some clumsy technician tying these on.’ He took out two red labels, printed with the words, ‘Dead On Arrival’. He held them up for Jane to see. ‘This is what you’ll be wearing to the next dance. I think they suit you.’

‘Don’t imagine,’ snapped Jane, ‘that you’re going to get away with this, because you aren’t.’

‘Oh, but I am. Peters, help me get the box out of the building. You’ll drive to the substation at Northangar, and we’ll initiate the reactor from the computer console there.’ He paused, drumming his fingers on the console. ‘No, Peters, not just one reactor – all the reactors. I’m bringing it forward. If this works, I’m going to initiate the climate change tonight.’

‘Because the damned Arcturian Space Fleet are on to us, that’s why.’

‘But not everyone is ready, Mr. Keys.’

‘Then get on your blasted phone and tell them to be ready. It may be weeks before we’ve ideal weather again. I’m not waiting to find out how many more Arcturian spies you’ve recruited to your organisation.’

‘Don’t worry, Peters, I’m sure you’ve done an admirable job. Think about it – we should have a superb view of the fireworks, but not as good as the one Jane is going to get.’ He turned to Jane. ‘Think yourself lucky, you’re going to be the only person to have a really close look at a Kelso reaction. It’s such a shame it won’t be for very long.’

She glared at him, bottomless disgust in her eyes. ‘Don’t bother with the bullying, you aren’t very good at it yet, I’ve had better threats from small rodents. I’m going to say it properly – this is your formal warning under the Arcturian rules of engagement. Cease what you’re doing and surrender to me at once, or you will place yourself outside Arcturian law, and make yourself liable to be stopped by deadly force.’

‘Really?’ said Kelso. ‘You expect me to be frightened?’

‘No, I expect you to go on being a bloody fool, and die on the end of an energy weapon. But I want to be able to tell the board of enquiry that I did it by the book, and that you were warned before you were shot.’

Kelso was still laughing as he left the building.

where to buy the books