This is the sequel to Run From The Stars and concludes the story. 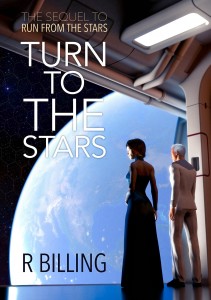 On the edge of interstellar war…
For five centuries the nine-world Arcturian Confederation have imposed an uneasy peace across more than five hundred human colonies This utopia could end in a catastrophic interstellar war if orthodynamics, the technology behind faster than light travel, fell into the wrong hands.
The Arcturian Confederate Space Fleet, grown old and inflexible after five hundred years of preparing for the wars that never came, seems no match for two adventurers who will stop at nothing to seize the technology for themselves.
Not even starting an interstellar war that will cost billions of lives.
One woman, small, seemingly fragile, torn apart by personal tragedy, alone opposes them. A woman with a core of pure steel.
Space Fleet’s Jane Gould stands between the human race and annihilation, but can she face the horrors that she finds?

Read an extract:
Jane and Sinclair flattened against the wall, either side of the door, as the footsteps came up the stairs. There was a loud tap on the door. Jane put her thumb on the safety ring of her energy weapon.
The door opened, and Duncan Kelso stepped into the room, right hand in a pocket. Jane lined him up in the sights. ‘You are under arrest for kidnapping and attempted murder. Take that hand out of your pocket. Then turn around slowly, keeping your hands where I can see them.’ She flicked the safety ring. The emitter clicked twice as it set itself live.
Kelso’s face curled into a sneer as he turned. ‘Little girl, you couldn’t do it, you couldn’t pull that trigger. Now, you’re going to put that toy down, and I’m going to walk out of here.’ His right hand was suddenly holding a revolver.
Jane snapped into the routine. ‘This is your only warning under the rules of engagement, stop what you’re doing and surrender, or you may be stopped by deadly force!’
‘Silly little girl, you couldn’t-’ he began to raise the revolver to aim at her.
There was a blinding blue flash and a stinging crack from Jane’s energy weapon.
Duncan Kelso began to say, ‘What…?’ but he was dead before he finished falling.
‘Oh yes I bloody well could,’ she said, turning the safety ring back to OFF. ‘If it’s him or me, then I’m sorry, it’s him.’
The door burst open as the marines came piling in.
‘Stand down,’ said Jane, ‘it’s all over. Take him to sick bay if you want, but I pegged him through the heart on number three, there’s not going to be anything the surgeon can do.’

where to buy the books